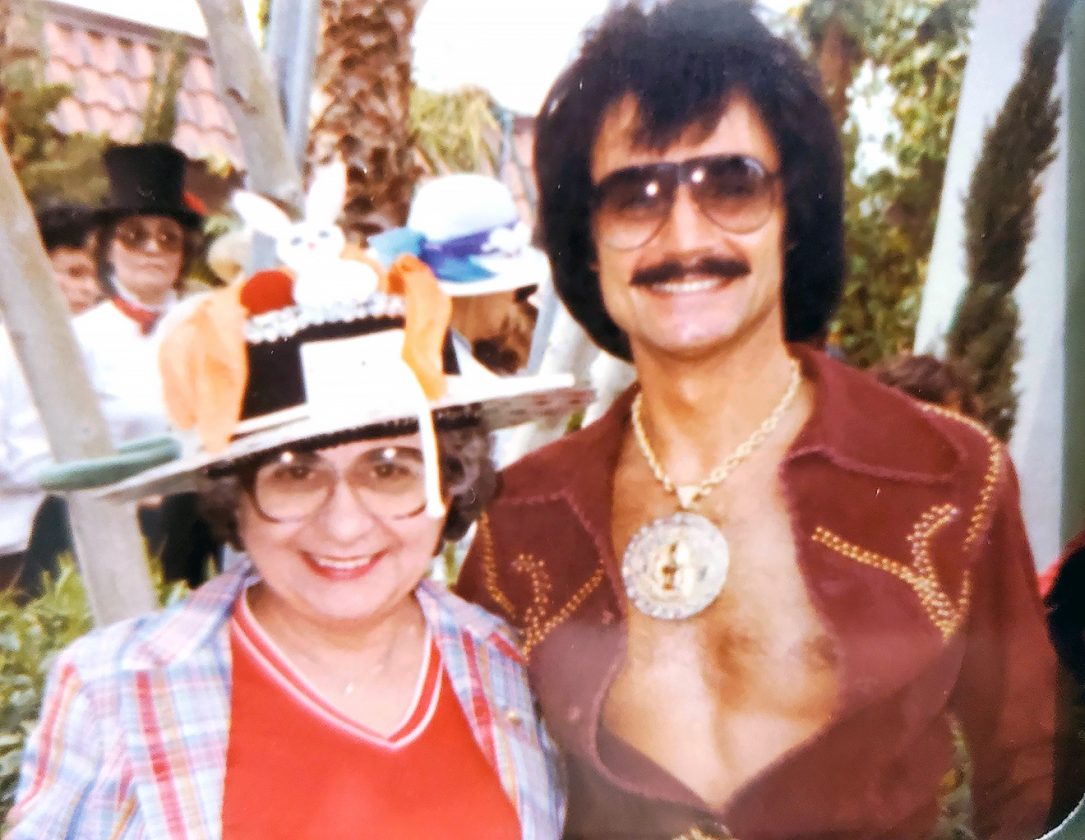 A WINNING HAT — Josephine Wszeborowski of Wintersville is pictured with Roy Horn of the famous duo Siegfried & Roy. Josephine and her son, Joe Hammer, who lives in Scottsdale, Ariz., attended a party at the home of the entertainers years ago, where Josephine won the magic-themed hat contest there. Horn died earlier this month at the age of 75. (Contributed photo)

SCOTTSDALE, Ariz. — The death of Roy Horn of Siegfried & Roy, the duo whose “extraordinary magic tricks astonished millions,” brought back a fond memory for a former area man.

“I’m so saddened to hear of Roy Horn’s passing,” noted former Jefferson County resident Joe Hammer, in a May 11 post on his Facebook page.“He and his partner Siegfried opened Las Vegas up to impressive illusion shows, taking magic to a whole new level,” wrote Hammer, who lives in Scottsdale.

“They once hosted a wonderful event at their home, complete with their animals, for a number of fellow magicians, and I was honored to attend. Spouses and female guests were asked to prepare a ‘magic-themed’ hat … My mom did so and won the competition.”

Hammer posted a photo of his mother wearing the winning hat, smiling in the picture with Horn at her side.

When contacted, Hammer said his mother, Josephine Wszeborowski, still resides in Wintersville and is 97.

“She decorated her hat with silks, full playing card ‘brim,’ rabbit and rope,” Hammer wrote in describing the hat.

“She attended a magician’s conference with me. Siegfried and Roy hosted a party at their home for the ladies. It was professionally catered, and they gave a personal tour of their home to the guests,” Hammer noted in explaining the particulars of the event from decades ago. “We had attended their shows many times — from the time they were at the Frontier, prior to opening their massive show at the Mirage. Local magicians meet at specific locations at midnight, after their shows are completed. I attended and met many of the magicians working Vegas at the time.”

Horn, who was critically injured in 2003 by one of the act’s famed white tigers, died of complications from the coronavirus on May 8 in a Las Vegas, according to an Associated Press story that ran in the Herald-Star. He was 75.

The AP story noted Horn had been injured in October 2003 when a tiger named Montecore attacked him on stage at the Mirage hotel-casino in Las Vegas. Although he underwent lengthy rehabilitation from the injuries, the attack ultimately ended the long-running Las Vegas Strip production.

The duo became an institution in Las Vegas, where their magic and artistry consistently attracted sellout crowds, accordinfg to AP story. The pair performed six shows a week, 44 weeks per year. They returned to the stage in February 2009 for what was billed as their one and only comeback performance, to raise funds for the new Cleveland Clinic Lou Ruvo Center for Brain Health in Las Vegas.

Hammer is a 1977 graduate of Jefferson Union High School who started a custom-painting business his sophomore year that “converted to a full-blown collision repair center a few years later.”

He moved to Scottsdale in 2004 where he is a transformational leader, marketing strategist, mentor and lifetime entrepreneur. Through his mentoring programs, workshops, seminars and consulting work, he has assisted “countless clients in banishing their limitations, building their business and living the life they truly desire.”

Today’s breaking news and more in your inbox

@username
44.5k Followers
Follow
Previous articleWill It Be The Last Season of The Fantasy Series?
Next articleHollywood’s Magic Castle Lays Off 189 Employees Due to Coronavirus – Variety